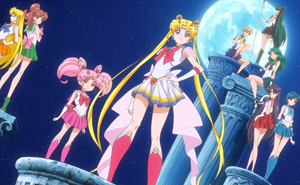 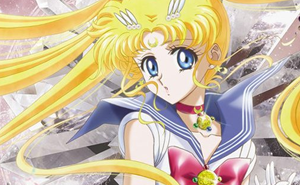 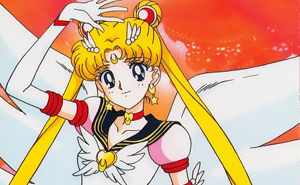 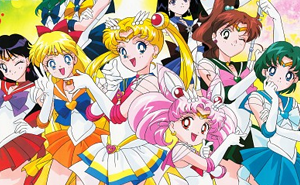 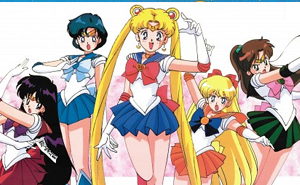 This page contains some basic story/plot background info that might be spoilers for those unfamiliar with the series.

The story of Sailor Moon revolves around the main character, Tsukino Usagi, who, at the beginning of the first season is a 14 year old junior high student. Usagi is a typical teenage girl: very cheerful, funny, and clumsy. She loves to eat, and to go shopping. Like many magical girls. Usagi is given her magical items by someone. In Usagi’s case, it was Luna, her talking pet, that gave Usagi her transformation brooch. By shouting “Moon prism power, make-up!” and holding onto the brooch, Usagi can transform into Sailor Moon, a lovely sailor-suited warrior. The exact phrase she shouts in order to transform changes throughout the series, as does her costume and transformation sequence. Her name also changes slightly. Furthermore, Usagi gets many different magical items that replace the original brooch (great for toy sales). Over the years she also becomes known as Super Sailor Moon and Eternal Sailor Moon.

According to Luna, there was a majestic kingdom on the moon a great many years ago, called the Silver Millennium. The kingdom was a happy place, ruled by the beautiful Queen Serenity and her equally beautiful daughter. The daughter, Princess Serenity, fell in love with a prince of the Earth named Endymion. Unfortunately the young couple has little time together, for the Moon is soon invaded by the evil Dark Kingdom, led by Queen Metallia and Queen Beryl. The battle is fierce, killing the people of the moon, Endymion, Princess Serenity, and the 4 sailor warriors who are her personal guard. Using the last of her life powers, Queen Serenity invokes the power of the ginzishou, an incredibly powerful silver crystal. With her dying breath, Queen Serenity sends the forces of the Dark Kingdom away, and sends the dead Endymion, Serenity, and the senshi to Earth, to be reincarnated in the future.

Years later, in our present, the former members of the Moon Kingdom are once again reunited to fight Beryl, who has regained her strength, and attempts to take over the world. Not only do they fight Beryl, but a host of other villains as well, including the siblings Ail and Ann (characters that appear in the anime only), the evil Wiseman, professor Tomoe, the Witches 5, Zirconia and the amazon trio and quartet, Nephrenia (also sometimes spelled Neherenia), and Galaxia/Chaos. In the three Sailor Moon movies, the senshi confront Fiore and his powerful flower, an evil Ice Queen, and Vadiane. There are a total of 14 Sailor Senshi in all: Sailor Moon, Sailor Mercury, Sailor Mars, Sailor Jupiter, Sailor Venus (who was popular as “Sailor V” in her own right), Sailor Pluto, Sailor Neptune, Sailor Uranus, Sailor Chibi-Moon, Sailor Saturn, Sailor Starfighter, Sailor Starmaker, Sailor Starhealer, and Sailor Chibi Chibi Moon. That is a lot of senshi!

The Sailor Moon manga was written and drawn by Naoko Takeuchi. The serialized installments of the manga ran in the larger ‘phonebook’ type girls manga called ‘Nakayoshi’. Kodansha published the manga compilations into tankoubon volumes.

The Sailor Moon anime was released in an English dubbed version in North America in the fall of 1995 by DIC. The story line remained basically the same, but character names were changed, and the dialog was changed a lot. New music was created as well. The series received exceptional ratings in Canada, and has gained much popularity over there. In the US, a combination of factors led to a lukewarm performance in the highly competitive syndication market. Personally, I kinda liked the North American Sailor Moon. I watched it every day and taped all of the episodes. However I tend to treat it as a novelty, and my real Sailor Moon appreciation is for the original Japanese version.

In 1997, the Sailor Moon manga was released in North America as one of 4 manga titles in a manga compilation called the Mixxzine. In 2000, Pioneer began releasing the Sailor Moon movies on DVD and new dubbed episodes of Sailor Moon S began airing on Cartoon Network. The manga was later released again in unflipped deluxe editions by Kodansha USA, and the complete series of anime was adapted into a new dub by Viz.