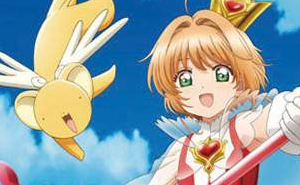 Card Captor Sakura is a beautifully animated series that tells the story of 4th grader Kinomoto Sakura. Sakura is amazingly cute and is fairly popular at school. She is athletic, and participates on the cheerleading team. For once, a magical girl who isn’t clumsy! Sakura has a best friend named Tomoyo (a rich girl whose favorite hobby is videotaping ‘her’ Sakura-chan!) and she lives with her older brother Touya and father Fujitaka. Sakura’s mother passed away when Sakura was little.

Everything in Sakura’s world is normal until the day she hears strange noises coming from her father’s library. Home alone and scared, she carefully goes to investigate, and finds herself drawn to a particular book in the library. It is called “The Clow,” and it has sun and moon symbols on it. Inside the book Sakura finds a deck of strange but beautiful cards.

There are no real pages of the book. The cards turn out to be rather powerful. When Sakura sounds out the word on the top card, “windy,” a gust of wind arrives and sweeps through the room, scattering all the other cards. Soon after, the book begins to glow, and a cute little flying bear-creature emerges from it. His name is Keroberos, and he is the guardian of the Clow Book. He is mad when he sees that Sakura has used the magic of the Windy card to scatter the rest of the cards, and decides that she must become a Card Captor and go out and capture all the cards back. It turns out that each card is magical, and every one has a different power. Having the cards running amok in the world would be very dangerous.

And so the adventure begins, as Sakura and Kero-chan go around trying to capture each card. With each capture she makes, Sakura gains more powers. Joining her in her mission is her friend Tomoyo, who appoints herself Sakura’s personal fashion designer and makes all sorts of costumes for Sakura to wear when capturing cards. Soon a rival appears to challenge Sakura’s right to have all the cards. His name is Li Syaoran, and he wants the cards too. With him is his cousin Meiling. Other characters eventually appear to make the plot more complex. People like a mysterious teacher named Kaho, a winged bishounen named Yue, and a transfer student named Eriol all bring more excitement to Sakura’s world.

Card Captor Sakura is way too cute! It is a fairly simple story that in some cases parodies common magical girl show conventions (like all of Sakura’s battle costumes, etc.) and there is a pokemon-like ‘gotta catch them all’ theme with her chasing the cards around. But the show has a lot of heart in the relationships between Sakura, her mother, her father, and Syaoran.

Almost 20 years after this anime aired, a sequel series, Card Captor Sakura: Clear Card Hen, aired in Japan. It takes place not long after this series ends and Sakura is faced with a whole new set of challenges!