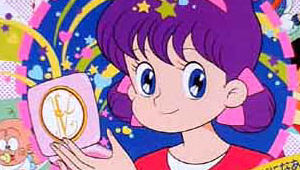 The plot from what little Himitsu no Akko-chan I have seen reminds me a little bit of Hime-chan’s Ribbon. However Himitsu-no Akko-chan has been around, in one form or another, much longer than Hime-chan. There have been several Akko-chan series over the last 30 years! The original Akko-chan anime was one of the first Magical Girl shows made!

It is the story of a young girl named Akko-chan who is given a magical compact that allows her to transform herself into other people when she says the magical words. (yep, sounds like Hime-chan!) But unlike Hime-chan, who usually uses her transformation powers for her own purposes and gets into mischief, Akko-chan uses hers to solve mysteries and problems. She isn’t fighting some cosmic enemy, she is helping the people that live around her. Akko-chan’s talking pet is her little white kitten.

Himitsu no Akko-chan is ©Toei