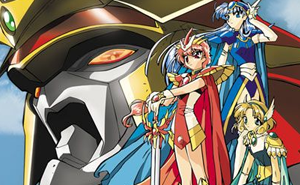 Magic Knight Rayearth is another one of those anime series that isn’t quite a traditional Magical Girl Show. The storyline reminds me more of other anime series like Fushigi Yuugi or Vision of Escaflowne, than of a Magical Girl show like Sailor Moon. It’s a swords and fantasy Magical girl show.

It is the story of three cute girls named Hikaru, Umi, and Fuu, who are snatched away from their respective school field trips at Tokyo Tower and transported to the Magical world of Cephiro. In Cephiro, they discover that it is currently under the control of the evil Zagato. It seems that Zagato has imprisoned Cephiro’s Princess Emeraude, the beautiful ruler of Cephiro. It was through the power of Princess Emeraude’s prayers that Cephiro was a happy and peaceful place for a long time. But now that she’s been kidnapped, the stability of Cephiro is in danger. Cephiro needs the legendary Magic Knights to return and save the world. Using some of her last strength. Emeraude summoned to the 3 girls to Cephiro to become the Legendary Magic Knights.

The three girls, who up until this point were strangers, soon become close friends despite their different personalities. Hikaru is the shortest and most ‘genki'(cheerful/perky) of the three. She wears her long red hair in a braid. Her powers are fire related. Umi is a bit flaky. She is the tallest of the three, and has long ice-blue hair. She is very good at fencing. Her powers are water related. Fuu is the brain of the group. She has short brown hair and glasses. Her color scheme is green, and her powers have to do with wind and healing.

There are many great things about Magic Knight Rayearth that set it apart from most anime series. First of all, it is a series by the ladies of CLAMP, a four-member manga artist group who have created a number of famous series including another Magical Girl, Card Captor Sakura. The show also has great animation for a TV series (in my opinion). There is a lot of humor (often the characters will pop into Super-Deformed mode) and plenty of action. MKR blends giant Mecha, romance, magical girl, and sword and sorcery all into one.

It is the Magical Girl elements into Magic Knight Rayearth that prompt me to include it in this page. The three heroines of the series are all in their early teens. They are color coordinated. Once they arrive in Cephrto, they soon gain Magical Items, namely gloves that contain their weapons and some armor. Hikaru and Umi get swords, and Fuu gets a bow and arrow. The armor they all get fits over their school uniforms. As the series goes on, their magical items change and grow in power. They also get more armor. All three girls have magical attacks, complete with attack names to use in supplement to their other weapons. There is a brief Transformation Sequence for each of them that can be seen in the first OP animation sequence. Finally, the have a Talking Pet in the form of Mokona, a marshmallow looking blob of white with ears and a smile. Mokona’s vocabulary is limited to one sound ‘Pu!” which she repeats constantly. Mokona doesn’t really act as a mentor type like other talking pets. Instead Mokona can be considered to be a walking supply store. Mokona can generate food from nowhere, along with other camping provisions such as a tent complete with pajamas for each girl. Cool!

A funny thing about MKR is the naming system. Most of the characters in the series are named after Japanese (and sometimes American) Cars! For example, there is a character named Geo Metro! The naming system is a popular tool in anime. Similar things can be found in Ranma 1/2 (Shampoo, Mousse, Cologne), Bastard! (Judas, Bon Jovina. Metallicana, Anthraxis..), Saber MJ (Cherry, Lime, etc). This makes things very funny!