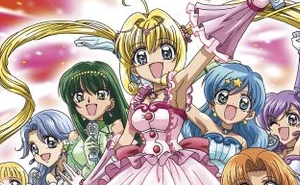 Mermaid Melody Pichi Pichi Pitch is a cross between The Little Mermaid and Sailor Moon. The heroine is a mermaid princess named Lucia who, as a child, rescued a human boy from drowning. Now, many years later, Lucia is on land, with legs, and is spending some time in the human world as a student. Her human form looks very different from her mermaid form, and she must keep her true identity a secret. The only ones who know are the people she is home-staying with. They are also from the sea. The boy Lucia met as a child is now a great surfer and is in her class at school. His name is Kaito, and he has always been haunted by the memory of the cute mermaid girl who rescued him. Was she real? Did he dream it all?

Lucia and Kaito hit it off quickly, and she is soon attending a surfing competition to watch him compete. Lucia likes Kaito a lot, but unfortunately she is unable to confess her love and her identity to him because, if she does, she will turn into sea foam bubbles. Ack! At the surfing competition things go fairly well until Kaito is attacked by an evil force under the sea and is dragged under. Lucia immediately changes to mermaid form and dives into the water to rescue Kaito, but the evil force that has him is too strong. It is then that Lucia learns to unlock the power of a pearl that she has, and transforms into Mermaid Melody Pichi Pichi Pitch.

Now this part I didn’t quite understand. Lucia is a mermaid. The battle is going on underwater. Yet her magical girl form is human, with legs. It seems silly for her to fight underwater by changing into human form. Anyway, in her new form, Lucia gets a cute mass-marketable microphone that she uses to karaoke sing at the enemy. I am not very font of the voice of Lucia’s seiyuu, so I can understand why her singing is enough to strike terror into the hearts of the bad guys and cause them to release Kaito and swim away. Her voice is pretty bad. ^_^ I think it’s supposed to be good though. Whoops.

Kaito wakes up to see the same mermaid who had rescued him as a child leaning over him. She is his age, blond, chesty, and really cute. Naturally he is smitten again! Unfortunately he does not learn much about her before she leaves. Lucia cannot reveal to him who she is, but he begins to wonder about the shell-shaped pendant Lucia wears.

Meanwhile there is chaos in the undersea kingdoms. An evil force is attacking the various mermaid princesses. Lucia discovers that one of her classmates is also a mermaid princess, and soon they meet yet another. They must join forces to defend the sea from the evil Kaito (same name as Lucia’s love interest!) and his minions. Each girl has her own color theme and transformation sequence. Lucia has a talking pet in the form of a little penguin.