Kamikaze Kaitou Jeanne is based on the manga by Arina TANEMURA. It follows the story of 16 year old high school girl Maron KUSAKABE. Maron is cute, with shoulder length brown hair that she usually puts up into 2 ‘rosette’ like twists at the sides of her head. Maron is not your typical high school girl. For the last month she has been taking the town by storm at night as the magical girl ‘thief’ Kamikaze Kaitou Jeanne. It turns out that Maron is the reincarnation of the great Jeanne D’arc (Joan of Arc) and is thus the only person who cannot be taken over by evil. With the help of a cute little angel-in-training named Fin, Maron transforms into the blonde Jeanne and saves people from being taken over by evil forces that have recently been manifesting in objects of art or music. Fin guides Jeanne on her mission and provides the power necessary for Maron to transform.

Things are going pretty well for Jeanne. She is gaining a reputation as a thief because when she banishes the evil from the objects of art, it is necessary to wipe them out, but she always leaves behind a beautiful picture of an angel, and saves the person’s soul from the devil. Jeanne’s only problem until now has been dealing with her best friend Miyako. Miyako lives across the hall from Maron, and is the daughter of a police detective. It is apparently Miyako’s main goal in life to capture Jeanne, and to become a police officer like her father. So far Maron has managed to keep her secret from Miyako. 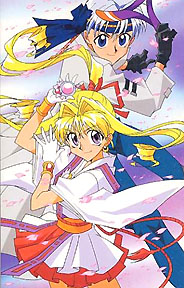 However the story takes a twist when a new boy moves in to the apartment next door to Maron’s. His name is Chiaki NAGOYA, and he has his eye on Maron. Why? because he knows exactly who she really is…and he has a secret of his own… Kamikaze Kaitou Jeanne is filled with magic, adventure, romance, and a lot of great artwork. I also like it a whole lot for my personal favorite character, Access Time, a male version of Fin, with cute black wings and purple-black hair. Access is so cute! The anime is also very good. The opening and ending songs are bouncy, Fin’s voice is adorable-personified, and the animation quality is pretty good. My only complaint about the anime is the horrendous color palette that they use for Miyako and Maron’s clothing. Ugh, most of their clothes clash badly.

Maron has two very nice transformation sequences when she transforms from Maron to Jeanne (one after a power-up) and in this case, her obligatory talking pet is Fin Fish. I like the fact that Jeanne has competition in the form of a magical boy, Sindbad. It’s not very often that we get a magical BOY in a series. He even has his own talking pet in the form of Access Time. I wish his transformation sequence was as detailed as Jeanne’s though ^_^ This is a great series. It has comedy, drama, angst, and romance. Yay!