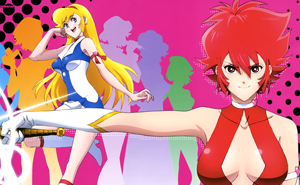 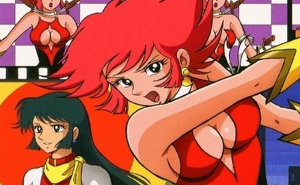 With the ending of the long running Sailor Moon Magical Girl series, a new series had to step in to fill some rather large shoes. But if anyone can take up where Sailor Moon left off, it’s Cutey Honey, one of the very first Magical Girls out there. This show was brought to us by the same crew that worked on Sailor Stars, and it really shows in the character designs.

Cutey Honey was originally a 1970’s anime series for guys, and as such contained a lot of fast paced action and plenty of cute girls, many of them wearing not a whole lot.  Well it seems that there are some changes in store for Cutey Honey. The character and her story have been reconstructed and reborn as a shoujo Magical Girls Series! With the new ‘Cutey Honey F’ (Flash) series, Cutey Honey joins the ranks of teenaged girls with mass marketable magical items!

A bit of retooling was required to change Honey from a shounen action heroine into a shoujo magical girl. It looks to me that Honey’s age has been trimmed somewhat, so that she is now about 16 or so. Her costume, while still revealing, is not as skimpy as it was in the OVA series or original 70’s TV series.  Cutey Honey Flash retains a lot of stuff from the original series, but it all seems so much more mass-marketable now, with a wide range of cute toys from Bandai.

As for the story, Honey is now a student at a private school whose father is killed by an evil organization. One day, this extremely handsome guy gives Honey her magical items, that enable her to transform into a variety of snazzy character types, each gifted in some sort of skill. By shouting ‘Honey Flash!’ she can become anything from a tour guide to a nurse, to a tightrope walker! All of her personas are very cool 🙂 Cutey Honey was a series just made to be mass-marketed. Why just have one Cutey Honey Doll when you can get one of *each* of her different personas! It is fun! Honey battles a monster of the episode, usually alongside this equally cute (though not quite as blatantly bishounen) guy named Seiji. He can usually see through Honey’s many disguises and tell that ‘Stewardess Honey’ is also Cutey Honey. I have yet to figure out if he can tell that the cute young blond schoolgirl Honey is also Cutey Honey.

Cutey Honey’s Magical Items include the many things she uses in her different identities (a motorcycle, a camera, a microphone, etc) along with the sword she fights with in her main Cutey Honey form. Honey also has this wrist bracelet that ejects a heart that transforms into a boomerang. It is pretty cool. Honey’s main magical attack is called (from what I can make out of her yelling) ‘Honey Lightning Flare!’. She uses her sword to blast a bad guy, and also does a sort of ‘Zorro-esque’ bit of writing out this very fancy letter in energy on the bad guy.

One thing I noticed is that none of the villainous henchmen that Honey battles is human. Whenever she ‘kills them’, they dissolve into this foamy bubble kinda stuff. I am not sure if this matches what happens in the original show. It does make it easy for Honey to go around killing all these people because they aren’t “really” human after all.

Anyways, I am finding myself enjoying the new Honey series. It has the same awesome opening song as the original, and you just can’t go wrong with that.