What Are Magical Girls? 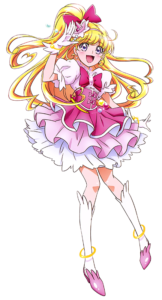 Mahou Shoujo, or Magical Girls, are nothing new to Japan. Magical Girls have existed in Anime for decades. But what are they?

One origin for Magical Girls can be traced to the US TV show, Bewitched, about an average guy who is married to a witch. Every episode involves her using her magic to somehow enhance or complicate their daily lives. The show was very popular in Japan, and the idea of a woman or girl with magical powers interacting with normal people really took off. Mahoutsukai Sally became the first animated magical girl, and it follows a similar format – girl with magical powers living among normal people and bringing magic into their lives. Hijinks ensue. Over the years the stories evolved and merged a bit with the superhero fighting shows aimed at boys and the use of magic words, magical items and transformations were added.

For the purposes of this site, Magical Girls are characters in anime that feature a young girl with magical powers. But it’s sort of a specific type of girl with magic. Not all super powered girls can be considered Magical Girls. There are certain criteria that must be met.

In general, Magical Girls are average girls who are suddenly granted magical powers by an outside entity, usually some kind of talking animal from another world or perhaps a queen from an alternate realm that is in danger. The magical powers can be accessed via gifted magical items that the girl has to hold and chant specific magic words to activate. The magic will often transform the girl, via a nicely animated transformation sequence, into an alter ego that performs tasks outside of the girl’s daily life, such as fighting monsters, performing as a pop idol, solving mysteries, etc. Sometimes there will be no transformation involved and the magic activated by the items will just allow the girl to do amazing things like teleport or stop time. The power of love, friendship, and loyalty is vital for Magical Girls and is what gives them strength.

The original type of Magical Girls are still around too, the ones who are originally from another world and come to Earth to visit. They are often princesses, and their time on Earth is some sort of test of competition for the crown. The girl will use her magic to enhance the lives of those around her.

These are the categories of Magical Girls that I use for this site. All of them often overlap with each other, so some girls may fit in more than one category:

Not only are there common plots and concept characteristics in Magical Girl anime shows, there are also many similar visual motifs between each anime show. As you go through the examples of various Magical Girl shows, notice the widespread use of such ‘feminine’ images as hearts, flowers, butterflies, ribbons, wings, angels, and rainbows. Pink and gold are common colors also.

There are also a lot of Magical Girls that don’t have an anime and only appear in manga. There are too many to include all of them on this site, but I may add a section for the ones that I find the most interesting or unusual.