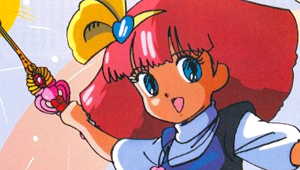 Minky Momo is the story of a cute little girl named Momo who is a Magical Fairy Princess from another world. Because the human world has lost touch with the spirit of true happiness and dreams, the Magical World has become a hidden place. The King and Queen of the Magical World decide to send their daughter, the Princess Momo, to live on Earth. Her mission is to try to spread joy and the power of dreams. Armed with a magical Wand, Momo uses her magic to touch the lives of those around her. This series has become somewhat infamous for the way in which it ends and what happens to Momo. A second series was made later on that reboots the franchise with a new Momo, and the 2 versions of the character end up actually meeting each other in that series,